November 24, 2019: Brockton FC United's hard fought quest to earn their bid into the 2020 Lamar Hunt Open Cup ended yesterday despite their argent and impassioned attempt to over come both the high powered NY Pancyprian Freedoms along with the unrelenting New England weather.

It was the early goal scored in the 4th minute by Freedom's #17 Charlie Ledula that was the difference maker in this match. Other scoring opportunities presented themselves for both squads in the first half, such as seen here:

But as weather intensified that the field became unplayable, the game was halted in the 54 minute and then called in the 58th minute.

We congratulate Brockton on a great US Open Cup Qualifying tournament performance and wish NY Pancyprian Freedom the best of luck in the next rounds of the tournament. 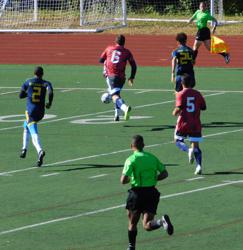 October 19, 2019: By Anthony Massey
Some players are fortunate enough to get a second chance to make a first impression, and so Leandro ‘Geo’ Alves and Brockton FC United are taking that opportunity.

“He wasn’t lucky enough to stay with the squad [D.C. United], but we have a lot of players like Leandro looking to play at a high level of soccer, and that’s why they take this competition very seriously because they know this is the competition that will give them exposure,” Brockton FC United head coach Herminio Furtado said. “We are playing in the Open Cup for players like him that aren’t otherwise getting the opportunity to showcase their talent.”

Alves scored both goals as the result of crashing the box after the 75th minute, and Brockton FC United goalkeeper Denzindo Barros recorded a shutout in his first Open Cup game as the team has yet to allow a goal in tournament qualifying.

“We expected Safira to step back and hit us on the counter but we did very well. The boys really anticipated any danger and were able to solve everything before it became a problem for us,” Furtado said. “We didn’t allow them many opportunities, and we created opportunities, and our boys really, really took this game seriously, and took the game plan and took it to heart and executed very well.”

Brockton United FC and Safira FC have yet to play against each other as members of the United Premier Soccer League’s Northeast Conference, but the clubs have a previous history all their own. Named Tarafal FC before rebranding in 2018, Brockton United FC defeated Safira FC in the 2014 Massachusetts Champions Cup final before Safira FC returned the favor with a penalty shootout victory in the 2016 U.S. National Amateur Cup tournament.

On October 19th at Dilboy Stadium in Somerville outside of Boston on Saturday, the clubs renewed their rivalry.

“This is the third ‘final’ we’ve had against them, and these are two teams that have been dominant in the Boston area for several years,” said Herminio Furtado, head coach of Brockton United FC. “This will be the continuation of that rivalry, and it’ll be a good one. We know how they play and we know their style of play. They have a lot of skill and a lot of pace up front in the attack, and they are very, very good with the details and they have a lot of experience, and so we will have to mature to cope with them.”