Safira FC's Amateur Cup run carried them all the way to the USASA Region 1 final where they faced the West Chester United Predators from Eastern PA. In an epic match, neither team let up a goal until the 119 minute mark in OT, when the Predators were able to net one. (Followed by a second at the 122 mark).

Congratulations to Safira on an exciting Amateur Cup run and lots of exciting soccer along the way.  Looking forward to seeing you make your next national cup bid! 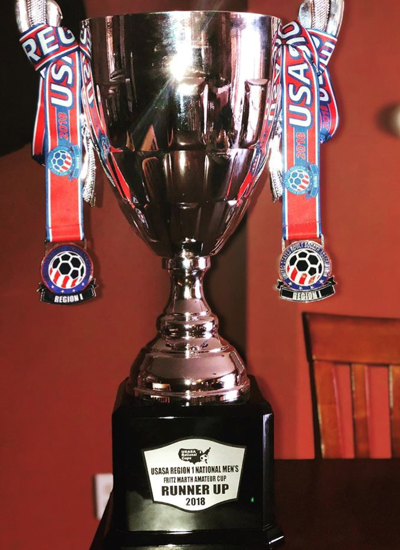 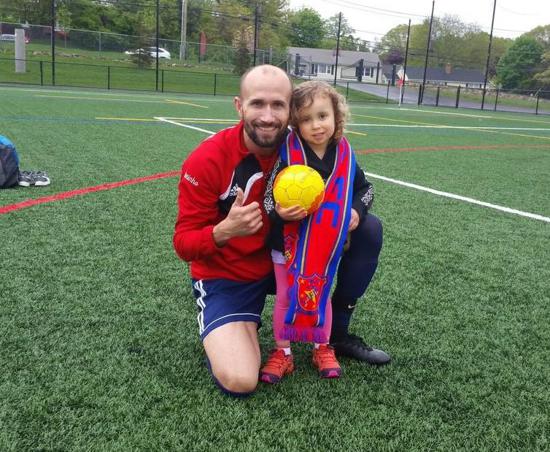 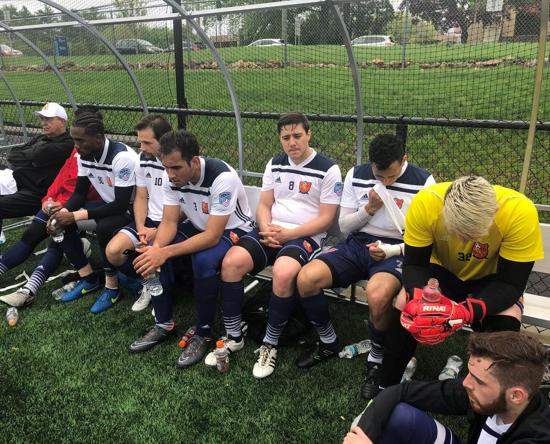 The game started with good ball possession by both sides. Safira open the score 15 minutes into the first half off a corner kick that Tiago Teixeira headed in. 10 minutes later Stephan score the second goal. At end of first half, Newtown Pride  was able to narrow the gap by scoring one, 2x1  verses Safira defender. In the second half, both teams have several chances but Alencar Junior received the ball and dribbled through 3 players but the Newtown goalie put him down thus Safira received the penalty. Alencar Junior took the PK himself and scored the third goal of the game finishing Safira 3x1 Newtown Pride.

To say Safira FC has had a solid past 12 months would be an understatement. The defending OTHSL D1 champions qualified for two USASA national cup competitions, as the Mass Soccer representative, and have advanced to the regional semifinal round in both. Ironically the Massachusetts champion was paired against the New York champions, NY Greek America SC, for the opening round in both competitions.

USASA Werner Fricker Cup: In the Werner Fricker Cup on April 15, Safira FC traveled to John J. Burns Park in Massapequa Park, NY to take on the New York powerhouse club. Safira's Alexandre Borlina and Stephan Mann put the away team up 2-0 early in the match before NY Greek America cut their lead in half 2-1 with 20 minutes remaining. Safira was able to find a late third goal which killed the game off and sent the Bay State club into the semifinals against Jackson Lions FC.

On May 6th at Veteran's Memorial Stadium, in the regional semifinals, Safira hosted Jackson Lions FC, a club from Jackson, NJ . Although, Jackson Lions scored first at the 17 min mark, Safira scored an equalizing goal 6 minutes later when a shot from Junior Alencar was knocked down by the Lion's goal keeper and Safira's Stephan Teixeira crashed the net and tapped the rebound in.  The match stayed tied until the Lions capitalized on a direct kick opportunity.  Although Safira goal keeper made the initial save, the Lions striker retrieved the rebound and passed to oncoming midfield who deposited a low shot just out of the reach of Safira 's sliding goalie. Safira had several scoring opportunities in the closing moments of the game, keeping dedicated fans on their feet cheering until the final whistle blew.

Although Safira's Fricker Cup run has come to a close, we wish them the best of luck in the USASA Region 1 Amateur Cup next Sunday (see below).

USASA National Amateur Cup: A week following their quarterfinal, Werner Fricker victory, Safira hosted NY Greek America SC at Dilboy Stadium in Somerville, MA. This time however, NY Greek America SC battled to a slim 3-2 win. A few days later however, it was reported by Region I that the Greeks were found to have used an ineligible player in the match and as a result the Greeks were disqualified sending Safira into the semifinals where they defeated Connecticut's Newtown Pride FC 3-1 on May 13th at 2pm in Bridgeport, CT. They will advance to the USASA Region 1 Finals on June 16th where they will play West Chester United at the Ukrainian American Sports Center in PA. 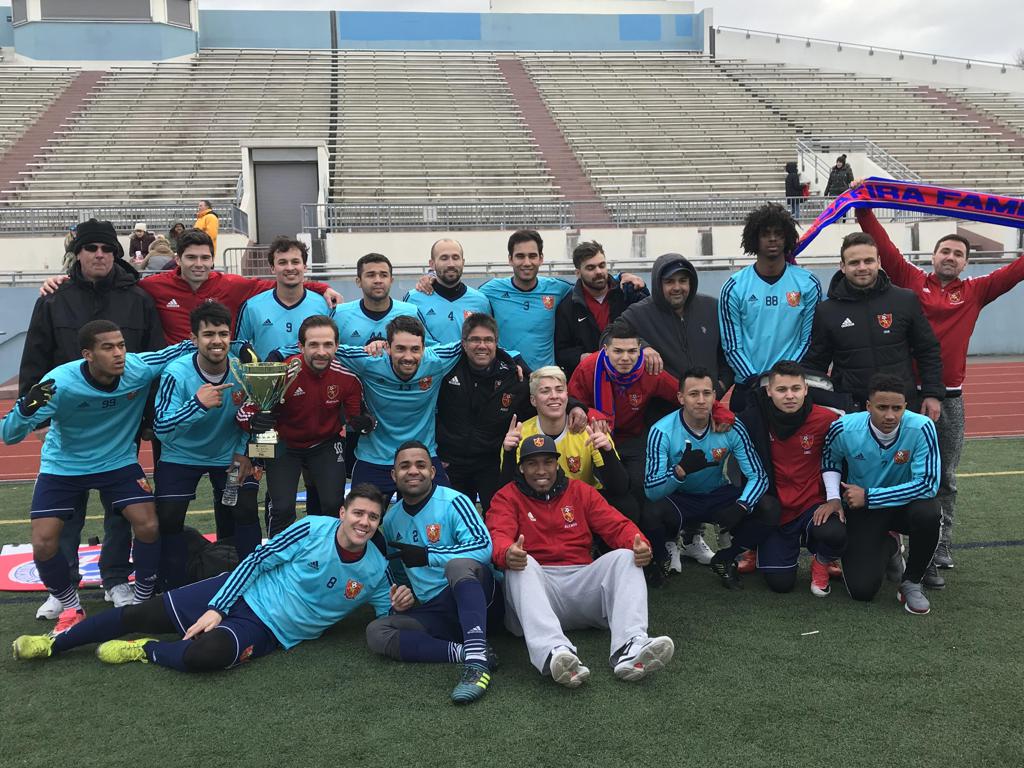 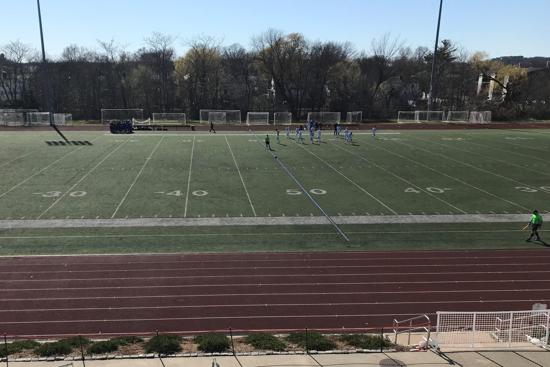 On this crisp, cool, December afternoon with the Boston skyline as a backdrop, the USASA Amateur Cup Mass Soccer State Final kicked off at Roberto Clemente Field. Both teams brought passionate supporters and the heated excitement of the game drew in new fans and spectators who could not help but watch the intensity of match up!

Tarrafal was first to score and went up early in the first half 1-0. Safira matched the goal before halftime and the game sat 1-1 at the half.  Tarrafal was able to strike again in the second half with another goal which it took Safira until the 81st minute to score the equalizer.

In overtime, Tarrafal had a few good opportunities. The Safira goalie made one beautiful diving save and Tarrafal released one shot that soared just over the crossbar. The OT periods ended with a score remaining 2-2.

PKs were exchanged by both teams.  Clutch shooting stayed on target just outside of goalies efforts for several rounds until, Safira goalie made a diving save followed by Safira finishing its next PK. Safira did not miss a shot in the PK rounds. 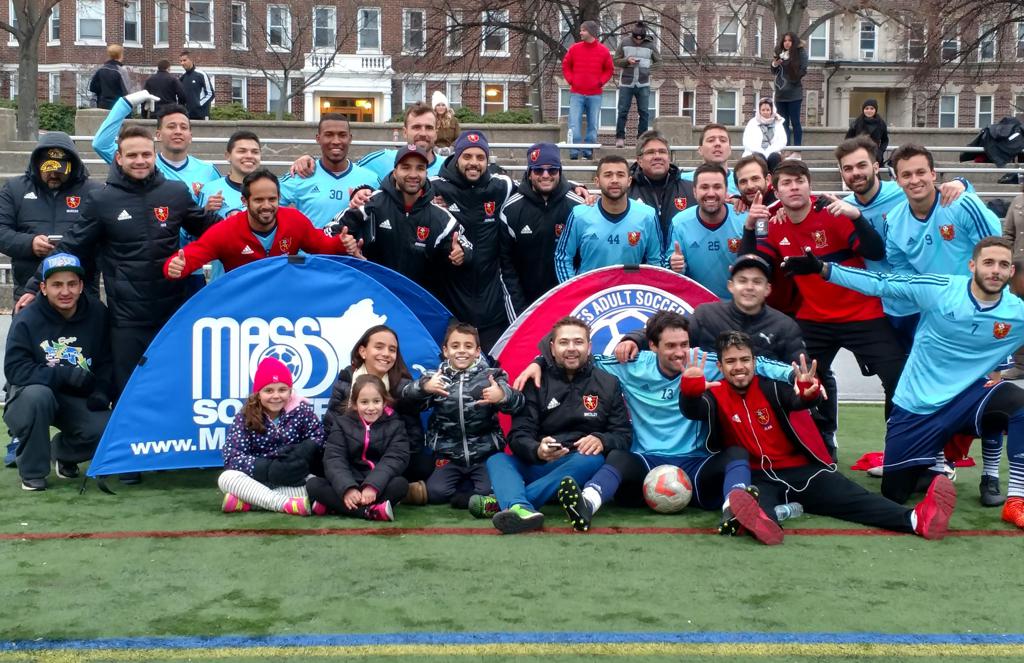