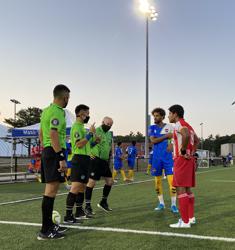 The fourth Nos Bandera goal was added right before the half.

Olympiakos had a few opportunities in the second half but did not have an answer for the speed and quickness of Nos Bandera. Felipe added a 5th goal around the 60th minute and Nos Bandera capped off the offensive show with one more goal which ended the game with the score 6-0.