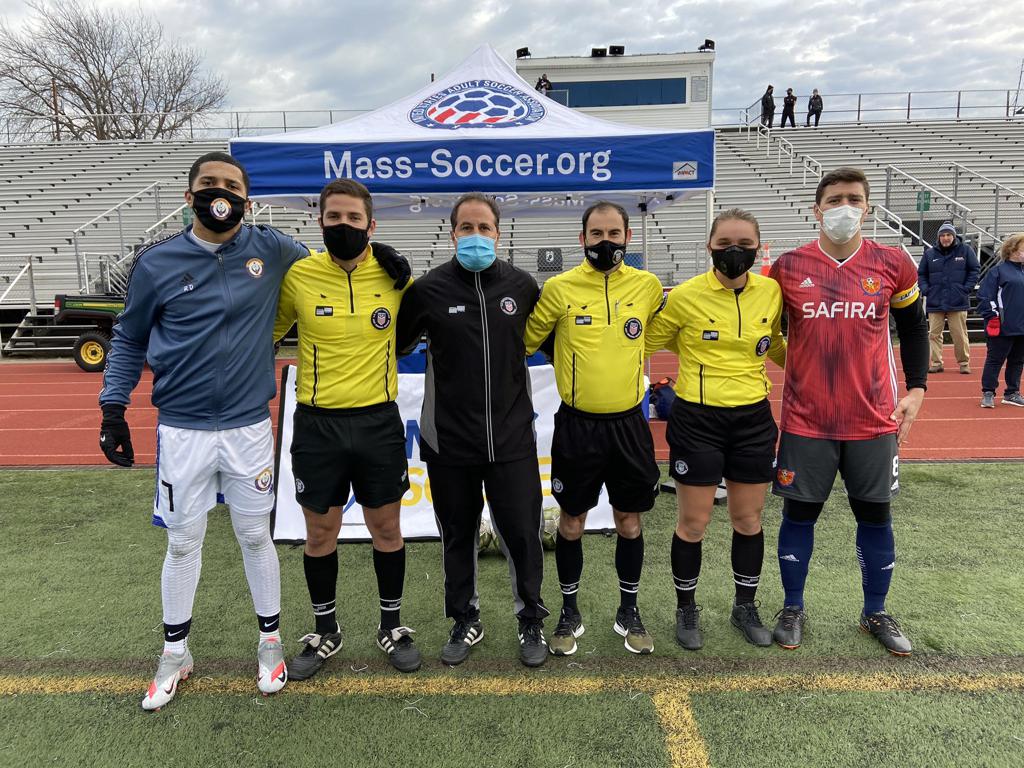 November 15, 2020: On a brisk fall day, the game that would determine who represented Massachusetts in the 2021 Regional Amateur Cup tournament was at hand. Brockton FC United took the field against Safira FC in the Massachusetts Amateur Cup State Final at Hormell Stadium in Medford.

The first half started with a fierce speed and adrenaline. Safira made the first true attempt as #4 Junior headed straight to net forcing an excellent Brockton save.

Not long after, the Brockton team countered with two corner crosses by captain #7 forcing Safira's keeper to respond.

Back and forth it went, with both teams showing extraordinary individual skill and team tactical approaches. There were numerous fouls by both teams and Safira had been given 2 red cards. Going into halftime, the score was 0-0, Safira had 9 field players to Brockton FC's 11.

When the whistle for the start of the second half blew, the intensity kicked up another notch and there was a clear push to goal on both sides of the field. After penetrating the box, a Safira player went down and was awarded a penalty kick. Safira FC's #8 Alexandre Correa stepped up to take the PK, finishing to the right of the Brockton keeper. The score was 1-0 Safira.

Brockton showed persistence in attacking the Safira defensive blockade with crosses to change the point of attack and a group of strikers on the back post. This hard work paid off when #11 Nilton Andrade struck one past the Safira keeper on a pass from Elizandro Cardozo. The score was tied; Brockton FC 1, Safira 1.

With only two minutes of regulation remaining, Safira hit a long ball from the back field that sent their strikers sprinting. It was #80 who would win the 50-50 ball and slide one to the back of the Brockton net. With only 6 minutes of stoppage time remaining, the score was Brockton 1, Safira 2.

Brockton showed character in their refusal to give up. Numerous crosses and counters went across the box in an attempt to bring the score level. When the final whistle blew, both teams could hold their heads high for the amazing level of skill and effort that went into the game.

Safira FC is the 2020 Massachusetts Amateur Cup champion and will go on to play in the Amateur Cup Regional Championship against other area state champions in the spring of 2021.