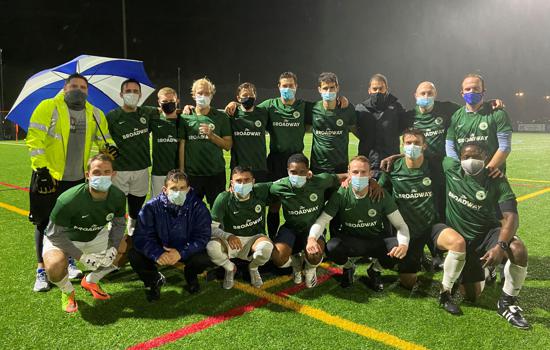 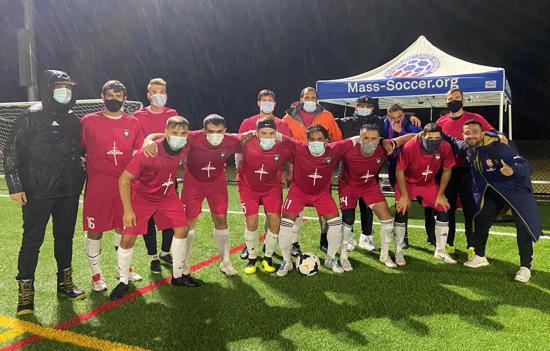 October 13, 2020: Mass Soccer kicked off the 2020-2021 US Amateur Cup Qualifier under the lights at Union Point Sports Complex in a steady rain and mist. Broadway Gunners and Albania United faced off for the right to advance to the quarterfinals and play the young, up and coming Brockton United U21 squad.

Approximately 20 minutes in, it was Albania United's Rafael Santos who started the scoring frenzy and netted the game's first goal. Despite stellar keeping as displayed in Albania's Emil Dedo's goal line saves, the Broadway Gunner's were quick to equalize.  Continuing the incredible back and forth action of the first half, captain Marty Galvin then added a Gunner's Second Goal to put the Broadway team up 2-1.

Not to be outdone, in the 40th minute, Albania's Rafael Santos stripped the ball at the top of 18 yard box.  He then completed a nice pass to Romeo Zego who fired a shot. The shot was deflected and hit the back of the Gunners net scoring the Albania Equalizer . The score was tied 2-2 going into half time.

The game remained a draw well into the second half, despite a goal waived off for an offsides call, some incredible efforts by both teams and less than perfect conditions.  It was not until the 83rd minute that Gunner's Aaron O'Neil netted the game winning goal just moments after the offsides call.

Congratulations to Broadway Gunners on their victory and a tip of the cap to Albania United for a well played game. The night showcased amateur talent, team play, intensity, and heart making a fitting kick off of the 2020-2021 US Amateur Cup Tournament!