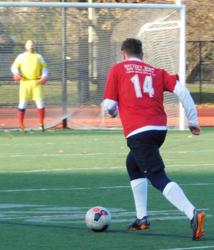 Early in the match, Gunners were awarded a PK, but it was turned away by a stellar save by goalie and team captain, Lee Popper.

Making a statement in their first Mengel Cup appearance, it was Needham United who was first to strike. Around the 26th minute, Donnie Aylward  served up a beautiful cross which was headed in by Matt Laning.

Gunners equalized right before the half with a header goal of their own from Aaron O'Neal.

Game remained tied though the 85th minute but it was the Gunners who were able to break through a recovering Needham defensive line with a nice pass up the middle and just get the shot by the sliding goalie, as seen here:

Although both teams showcased outstanding goal keeping, it was Gunner's goalie who came up huge in 2 last minutes, stone walling 2 promising opportunities by Needham attacks.  One seen here on a corner:

In last second Needham opportunity, Gunners goalie had a diving, finger tip, save that just redirected the ball wide and hit the post and went out of bounds.  Moments later the final whistle blew and the Gunners punched their return ticket to the Mengel Cup state finals.  Next Sunday, they will try to a contain Safira's high scoring offense in order to repeat as 3rd time Mengel Cup state champions.